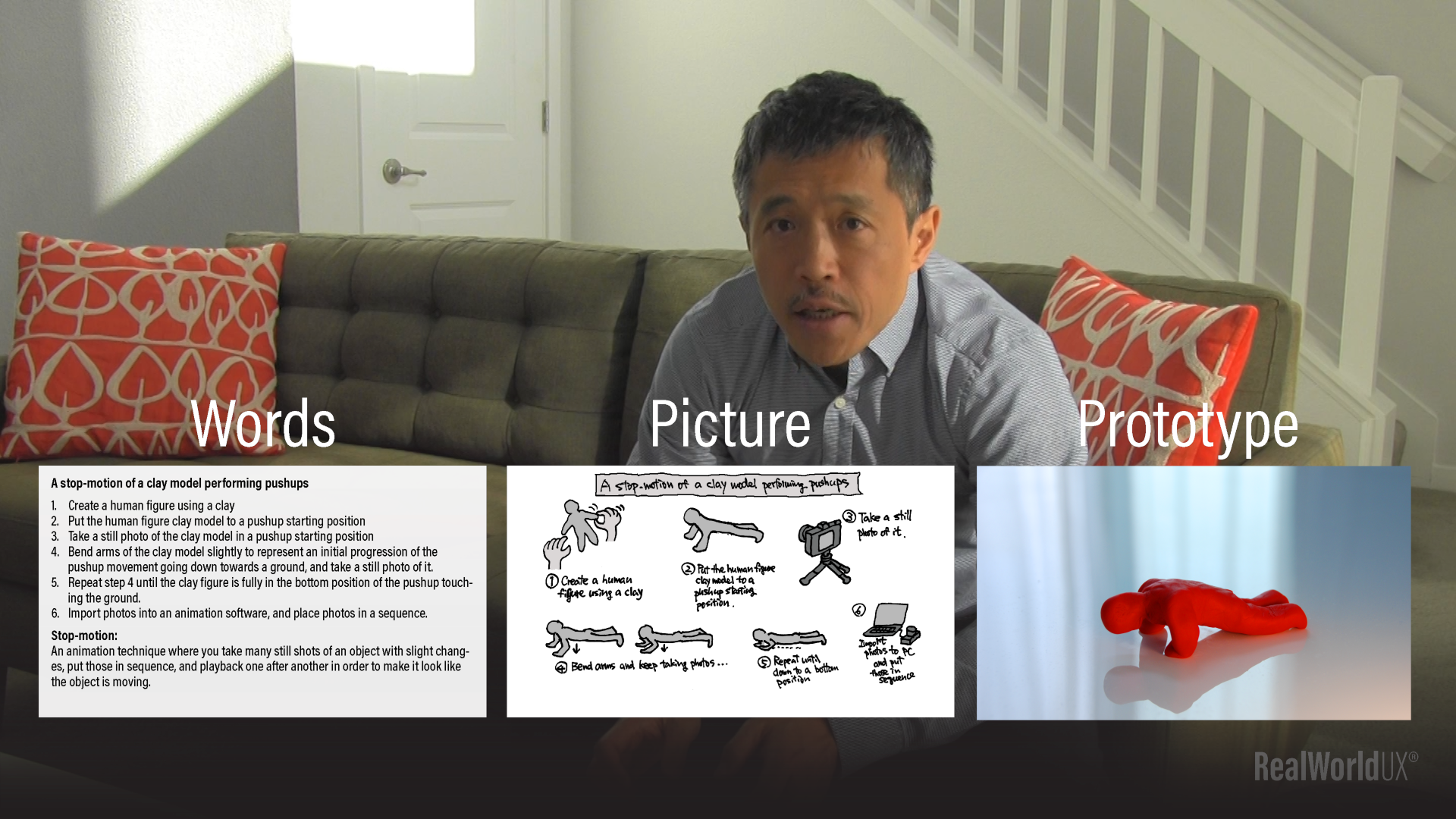 For a UX designer, a prototype plays a critical role.

A picture is worth a thousand words.

A prototype is worth a thousand pictures.

As an example let’s say,  “I want to create a stop-motion of a clay model performing pushups”.

From a product point of view, this could be an instructional video product, or part of an exercise app, but let’s not too worry about that, as we are focusing on differences between words, a picture and a prototype.

If I want to communicate my concept in words as descriptive as possible, it would be something like this:

A stop-motion of a clay model performing pushups.

Stop-motion: An animation technique where you take many still shots of an object with slight changes, put those in sequence, and playback one after another in order to make it look like the object is moving.

Now this lengthy text description can be visualized in one diagram, which is basically a picture.

As you can see, a picture, in this case a diagram, makes it easier for human to comprehend the concept better compared to a lengthy text because it’s visual, therefore you can immediately see it.

Now, while this picture, which is a diagram, is easier to see compared to text-only description, it still requires some sort of logical decoding to fully understand what’s explained, and does not convey the feeling of the final product.

It’s like looking at an instructional manual for assembling a furniture.

You can see what kind of furniture that is, but you don’t get the feeling of what it’s like when its built.

We, humans respond to things emotionally.

Before we understand things logically, we sense and feel things intuitively, emotionally first.

OK, let’s go back to our clay model stop motion.

So here’s a “prototype” of the clay model stop-motion.

As you can see, it immediately gives you a live, vivid impression including the color, the texture, the motion, and so on.

Now, I intentionally made the picture rough and black and white to make the prototype stand out even more with a stark contrast.

I also intentionally used an example which is not a typical UX project with some digital user interfaces.

I wanted to really highlight the differences between words (text), picture and a prototype through a simple, straightforward example to make the point clearer.

A definition of prototype is broad.

According to wikipedia, “a prototype is an early sample, model, or release of a product built to test a concept or process.”

A fidelity of a prototype ranges from extremely low to extremely high.

It all depends on the context and the intention.

In UX prototypes however, the functionality part is not the focus. The overall experience is.

What this means is that functionality part can be, or should be faked. But the experience part should be simulated as close as possible to the final product.

This includes emotional aspects of the product, such as feeling that you get from colors, textures, tactility, motion, sound, or even smells and tastes in some cases.

So the value of a prototype is to simulate the feeling of a final product as much as possible under given limitations and constrains.

Industrial designers always make physical mockups, low fidelity ones with clay or a 3D printer to test forms, then high-fidelity mockups at a mockup studio with real-looking material and finish.

Whatever those are, in whichever fidelity those may end up having, prototypes are going to be far more effective, valuable and meaningful especially for a group of people to get on the same page, compared to just images or text description.

UX designers should be smart and creative in how to fake and simulate the experience of a final product in the most effective way possible at any point in the process of a project.

From this perspective, UX designer is like a magician!

It’s actually quite fun when you successfully faked certain user experience of a product in front of your audience as if it’s working for real!