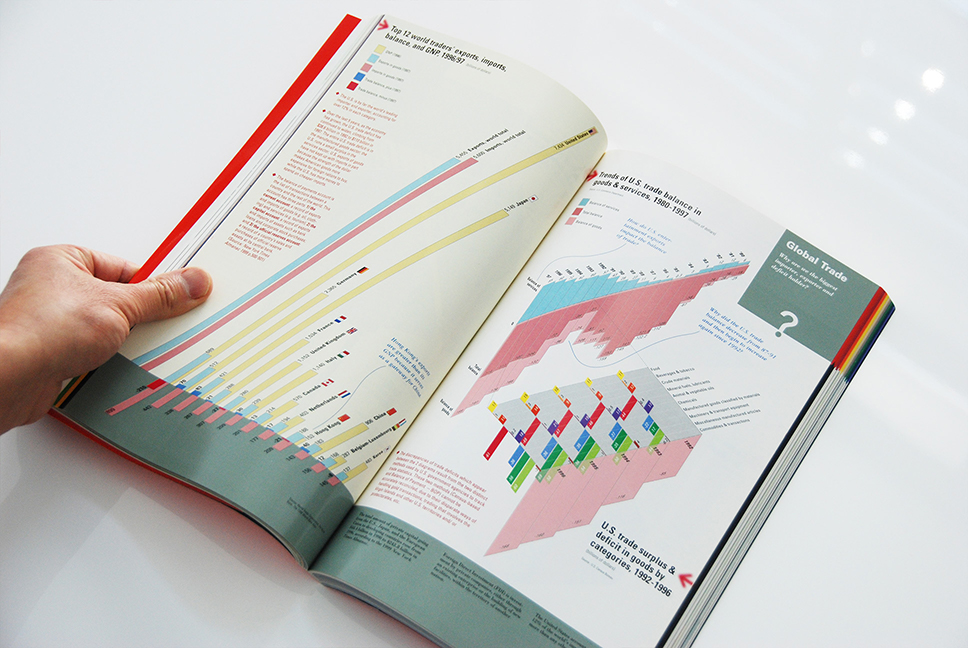 I worked on infographics for one chapter of UNDERSTANDING USA, a TED conference textbook back in the year 2000. So why talk about infographics from such an old book now?

The loss of my favorite teacher, Krzysztof Lenk, gave me an opportunity to reflect on what I worked on under his direction back then. What I realized was that there are so many insights from this project that can still be applied to today’s work of UX designers and information designers. I would like to share my re-discovery of the project.

In 1999, Krzysztof Lenk and Paul Kahn from Dynamic Diagrams were invited by Richard Saul Wurman (the founder of TED) to be part of a team of 12 information architects to contribute to the book. I had an opportunity to work with Krzysztof and Paul on this project.

Below is a quote from Richard Saul Wurman on how he introduced the concept of UNDERSTANDING USA in his letter to the contributors on November 13, 1998. He initially called it “Atlas of Understanding.”

The Book: Atlas of Understanding:

To answer the complex TEDX questions, my staff and I are researching government statistics, recent studies by foundations and think-tanks, timely articles by leading journalists and relevant material from industry groups and trade associations.The resulting book will be the Atlas of Understanding — a comprehensive fact-based guide to the fruits of our research. The Atlas will be the TEDX Bible, its blueprint, its compass and its yardstick — striving to be Solomonic in its fairness and impartiality.

But please don’t make the mistake of thinking of this book’s neutrality will translate into something dry, academic and boring. On the contrary, I intend to make the Atlas a showpiece, a demonstration of how complex data can be accessible, engaging and entertaining — without sacrificing its integrity or its nuances. How? There exists within the upper echelon of America’s graphic designers an elite group I call the Information Architects. These talented designers (some of whom are profiled in my 1997 book Information Architects) will condense the TEDX research into its most revealing and informative components. Their extraordinary graphs, maps, video, computer simulations and a host of other media will bring the TEDX information to life. The Atlas will be like a master class in effective information design. Trust me; it won’t be boring.

When Krzysztof and I visited Richard Saul Wurman’s house in Newport, Rhode Island, we were handed over a box full of statistics, hundreds of pages. The topic our team got assigned was “Global Economy / Foreign Trade / Immigration / Balance of Payments / Business / Workforce / Jobs”, among eleven broad social issue areas defined by Richard to be covered by the TEDX Conference.

Typically, most design works start with content that is already curated, edited, and selected by a client, an editor, or a writer. However, in this project, we were able to start from which statistics to pick and choose from piles of raw data, loosely organized based on broad questions provided by Richard Saul Wurman as a guide.

Obviously, in order to pick and choose, you first need to fully understand all the statistics packed in the box. This by itself was a lot of work. But it was a lot of fun too, getting immersed deeply into the sea of data.

In the box, the statistics were organized by folders based on topics. Krzysztof would give me one or two folders at a time, and I would take those home, scrutinize all the data, take notes, hand-drawn graphs and charts out of tables, and playback my learnings to him at the next meeting at his studio.

When I went through this data-immersion process, I gradually started to paint a picture, started to connect dots. Then I was hit by various “ah-ha” moments when various connected dots came together all of the sudden and started to shape a new meaning.

Visualizing layered information effectively and holistically to show its inter-relationships

One of the interesting things from an information design perspective that came out from this project was how to visualize layered information effectively and create a holistic view of encapsulated data and their relationships. The above spread showed data about foreign trade, based on a simple question: Why did U.S. foreign trade gain a little and lose a lot?

The spread was designed in a way so that a viewer naturally went through a three-step progression in order to fully understand the information. The page greeted its viewer first by (A) introducing a basic definition of foreign trade, showing what trade surplus and deficit meant through a simple diagram. Then it continued to (B) a basic concept of a balance of trade, top countries that U.S. traded, and how the U.S. had huge trade deficits.

After these introduction made by A and B, the third step, (C) a highlight of the story was represented on the right page in the form of a pair of three-dimensional diagrams, which illustrated a contrasting two diagrams side by side, one showing the top five countries that U.S. had trade surpluses against, the other depicting the top five countries that the U.S. had trade deficits against, as of February 1999.

These three-dimensional diagrams attempted to highlight stark contrasts at multiple levels altogether, such as:

Now, some people might question the use of three-dimensionality incorporated here. But our team, primarily Krzysztof and myself, concluded that this three-dimensional approach enabled not only an aesthetically intriguing visual impact but also a meaningful interrelationship between complex layered data. As a result, while it did require some time to decode the meaning of the diagram, we were able to create a holistic view of the foreign trade problems that U.S. faced at the time, presenting all the above in one pair of diagrams.

Below outlined the basic process our team went through from the data analysis to the final design.

Today, we live in a high-paced information world, where a huge amount of data is constantly captured via sensors, collected via various software, analyzed via machine learning algorithms, and then visualized through computer automation. We live in a world where data visualization is ubiquitous.

Computers have a superior ability to perform astronomically complex and massive calculations within a second. But at the end of the day, it’s humans who make the good use of those data collected, calculated, and presented automatically by computers. In order for us humans to grasp the meaning of data, we need to visualize data in a way that humans can comprehend.

Humans are bad at precision and massive calculations. What humans are good at, however, are seeing a forest as a whole, rather than precisely counting how many trees make up the forest. We seek a holistic overview, broad patterns, and trends, interrelationships between various data points. These holistic overview, broad patterns and trends, and interrelationships between various data points are what we base our actions on. These are the types of things that designers are responsible for. And I believe these are the areas that we as humans are still better at over computers.

Because 12 designers (information architects) were invited and designed each assigned chapter of the book, the book as a whole ended up a bit chaotic, even though the information contained was really amazing, and it certainly became an entertaining showpiece as Richard Saul Wurman envisioned. It was really interesting to see how various information architects ended up trying to flex their visual muscles with cool effects, vibrant colors and beautiful pages. On the contrary, Dynamic Diagrams remained grounded with a more controlled, classic visual design style, focusing on the content rather than presentation effects to wow the viewers. Ironically, Dynamic Diagram stood out from the rest.

The above-left spread was designed by Ramana Rao, presenting “Food: How did food production keep pace with population growth? How much of what kinds of proteins do we consume?” The page was beautifully designed, so it was successful in attracting viewers into the page in the first place. However, a dominant photograph took too much attention away from the graphs themselves, which made the graphs look insignificant.

The above-right was designed by Hani Rashid and Lise Anne Couture, visualizing “Transportation: How do Americans get around?” The sculptural object looked intriguing because it was so unusual. Again, it was successful in stimulating the viewer’s curiosity, but at the same time, the way the statistical graph was mapped onto the surface of such an irregular form factor made it hard to read.

This goes back to a principle of user-centered design that became common practice for today’s designers, primarily UX designers.

Whether it’s a user experience for a digital product, a data visualization, or infographics, or any products, the design should never be treated as a “designer’s playground” to selfishly satisfy themselves. Designers should always work FOR users/viewers/audiences. Design is just a vehicle to deliver the message to its users/viewers. When that was successfully done without ego, the design itself recedes to the background, almost becoming transparent, so that a viewer is fully immersed with the content itself.

These insights are what I re-discovered from a 20-year-old print-based infographics project, the importance of putting a user and the content at the center as a designer, which is the very essence of user-centered design. In order to properly execute this, you need to go through a process of content analysis to acquire a deep understanding of the content. And finally, this deep understanding of the content gives you an ability to present a holistic overview of the information in a meaningful way so that humans can easily comprehend and act upon.

I am grateful that I had a chance to reflect on this project now at the beginning of the new decade and share my journey with you.

Here’s a PDF version of business chapter of UNDERSTANDING USA.

Richard Saul Wurman is an architect, information designer, a founder of TED. He is also an author of Information Anxiety, one of early books that pointed out the problem that we all face in today’s world: information overload, and resulting information anxiety. He coined the term “Information Architect”.

UNDERSTANDING USA was a textbook for the TEDX Conference in Monterey California, on February 2000. Richard Saul Wurman invited 12 information architects to design infographics of various social issues, including Krzysztof Lenk and Paul Kahn from Dynamic Diagrams. Krzysztof was one of my thesis advisors at RISD.

This article was originally published on Medium in Nightingale on 3/24/2020.