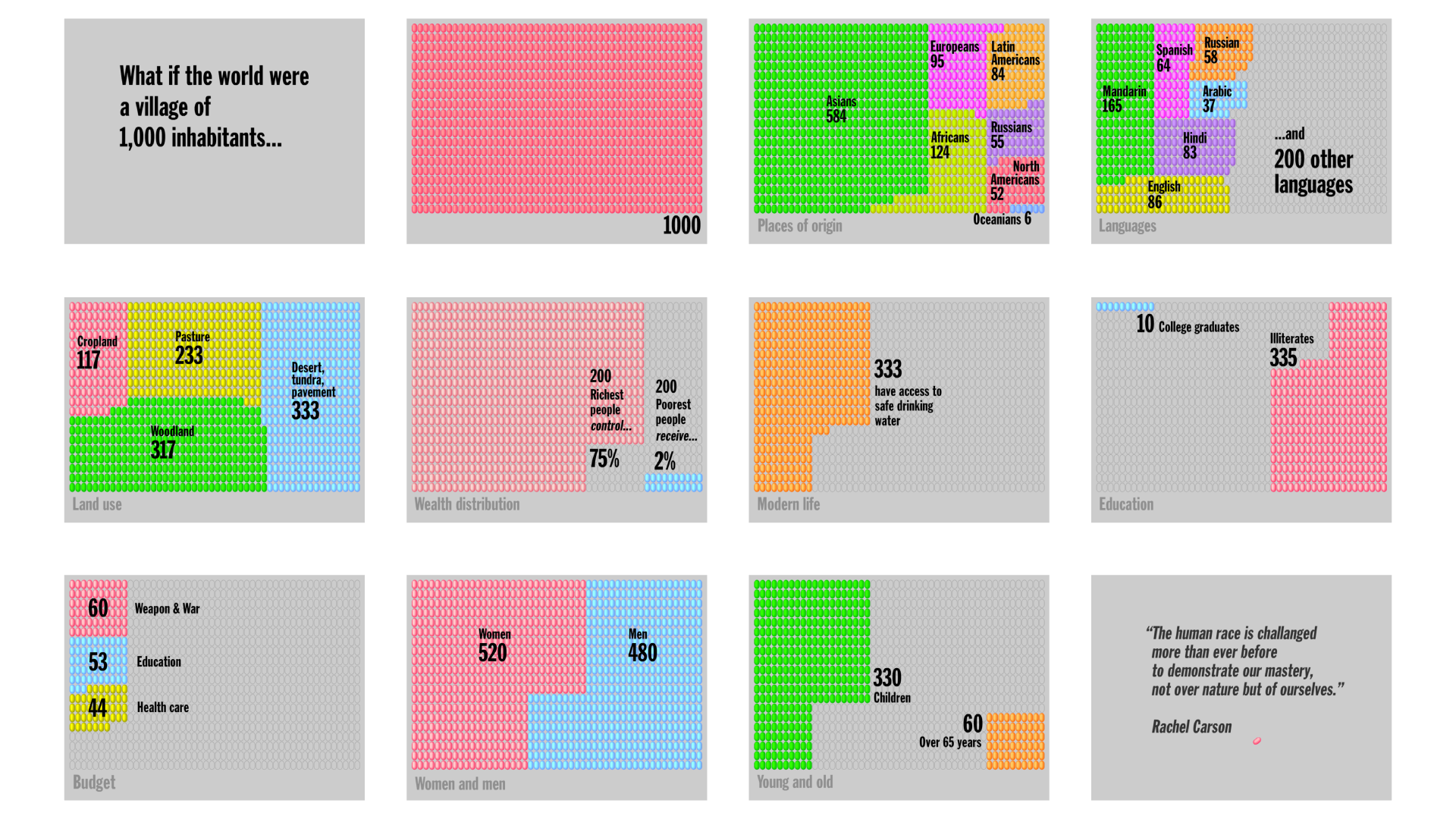 Twenty years ago, I worked on a project called Global Village. It was a data visualization animation presented by Krzysztof Lenk and Paul Kahn at TED10 Conference in year 2000, and was greeted by a standing ovation.

Last year, I was saddened to find out that Krzysztof passed away. He was one of my favorite teachers at RISD. I exchanged a message with Jack Lenk, Krzysztof’s son, and he mentioned …

… one of the pieces I found (from my father’s work archive) was that Global Village animation — still looks great after all these years!

Because Global Village was one of the most important early projects that I had the honor to work with Krzysztof for, I dug into my archives and watched it again. Jack was right: Even after 20 years, the animation looked fresh and crisp, with almost a timeless quality. This sparked my curiosity as to why. I wanted to spend some time thinking through this project once again.

There are still many key elements in Global Village animation design that are relevant to today’s UX and information design practitioners. I also realized that I learned so much from this project, which has been impacting my work for all these years since. I would like to share these insights.

The power of a core concept

When you google “what if the world is a village of 1000,” you get 273 million results. This is the core concept that we used for the Global Village animation 20 years ago, borrowed from the World Village Project by worldvillage.org, which unfortunately no longer seems to exist.

The concept of compressing the 7.7 billion world population down to 1000 to get a clear picture of the earth’s overview was a brilliant idea. No question.

There’s no surprise that so many people are attracted to this concept and visualized it in so many different ways. This is a great example of how a core concept at a content level plays a significant role in creating a quality design to begin with.

But when you take a closer look at various visualizations, you start to realize that design is so subjective with so many possible directions to go, depending on designers’ intentions, decisions, and interpretations.

Above are screenshots of the five most-viewed videos on the topic when you Google, compared to the Global Village screenshot on the bottom right, explaining the concept of shrinking the entire world population down to a village of 1000 or 100 at the beginning.

As you can see, each has its own design and visual style, remarkably different from each other. The number of visual design styles can be endless. Each designer has their own style, and each viewer has their own preference.

Any visual design style is fine as long as it works. But it has to work across its entirety of a piece, not just in one particular scene or section. And ideally, the design system should help its audience understand the content better.

Subtractive rather than additive

The above shows another set of screenshots from the same videos visualizing a number of people based on a place of origin. Because it’s about geographic population, having a world map makes logical sense. However, below are questions that a designer should ask before jumping into a conclusion …

Above are more screenshots showing the statistics on religion. While illustrations and symbols are nice to have from a purely visual design perspective, it’s not immediately clear which illustrations or symbols represent which religion. A voice-over helps, but if you miss the audio, it’s hard to understand.

The above diagram shows how each video starts to build up its design system as it progresses. As you can see, some are more consistent than others. As a designer, questions you should be asking are:

In order to answer some of these questions above, you need to understand the content. You need to be crystal clear about the core message you are going to deliver to its viewers. To get there, you need to work on content analysis and content strategy.

Content analysis is basically to carefully go over all the available content and examine what it means. Below are some questions to go through during content analysis. Keep in mind that these questions are created with Global Village in mind. Depending on a project/product, of course, questions would vary.

Once you answer all these questions, you will start to get a crisp picture of how the content should be laid out in which sequence to tell a compelling story. This is content strategy.

Here is the content strategy for Global Village project that I was part of.

As a designer, it’s important to have a good understanding of the content that your product is dealing with in order to make its user experience as good and appropriate as possible. This should be done with UX researchers, UX writers, technical writers, product managers (PMs), and engineers.

Oftentime, UX designers may not have much control over the content that they receive. But UX designers still have enormous power in influencing the overall user experience of a product they design because all the content and information will be presented through a design system that they as UX designers create and specify.

How do you tell a story? How do you sequence and structure a story to make it effective and easy to understand? What is the most effective design system to realize that? These are all up to UX designers.

A designer has the power and responsibility to create a system for the product they design. A design system should be created in a way so that it fits the content and the context of the product so that the experience of the product is easy to understand and delightful to use for its target users.

In order to do so, a designer needs to have a deep understanding of the content. Only through this deep understanding, a UX designer is able to create a design direction so that all the efforts are made towards that set direction, which will result in a design system that is deeply integrated with the content strategy. A well-thought-out design system can educate a user through a use of repetitive patterns as a system so that a user can naturally learn how things work just by using it, so that she can just focus on the content or a task itself. When that is achieved, a design becomes transparent.

Today, data visualization is one of the hottest areas in design, with so many data being constantly captured automatically. This means UX and information designers are more and more responsible for how to visualize those data in an easy to understand manner without causing information overload. Simplicity is the key. How to subtract as many visual elements as possible without losing the quality and the meaning becomes critical.

Below shows an overall progression of three animation designs from start to finish, represented in a group of screenshots. The first one is by Dynamic Diagrams, the second by RealLifeLore, the third by GOOD.

While criticizing others are not my intention, when you take a look at all three different designs together, it’s pretty obvious and safe to say that Dynamic Diagram has the most consistent and clear design system put in place, that carries through consistently from start to finish.

After all, it’s user-centered design

It’s all about how to make things as easy and clear as possible for the user. It’s not about pleasing yourself by using a bunch of cool visual effects.

Today’s UX designers need to design user experiences of complex products that have many flows branching out depending on how a user makes choices, how a user enters a particular screen from which entry point, and so on. Obviously digital interactive products are much more complex compared to a data-viz animation shown here.

But regardless of the differences in complexity and media types, the fundamental approach remains the same. Just like compressing the 7.7 billion world population down to 1000 makes us understand more clearly, looking at how a content strategy and a design system impact a data-viz animation design gives us a clearer picture of its importance and impact.

This approach—having a content strategy, a deep understanding and analysis of content, and implementing that strategy into a design system—is what I learned from Global Village animation, which still serves as a foundation of my work today as a UX designer.

A bit of a background…

Originally, TED (technology, entertainment, and design) was cofounded by Richard Saul Wurman and Harry Marks in 1984. When it was rebooted in 1990, it became a popular annual, invitation-only event in Monterey, California. In 2001, Chris Anderson’s nonprofit Sapling Foundation acquired TED, and Anderson became its Curator.

All the statistics used in Global Village animation was based on what was available in the year 2000, representing the world of late 90s.

This article was initially published on Medium from Nightingale, a data visualization journal on March 10, 2020.

2 Replies to “#15 Seeing the World as 1000 People: How I Learned Content Strategy Informed Design Systems for the TED Conference”