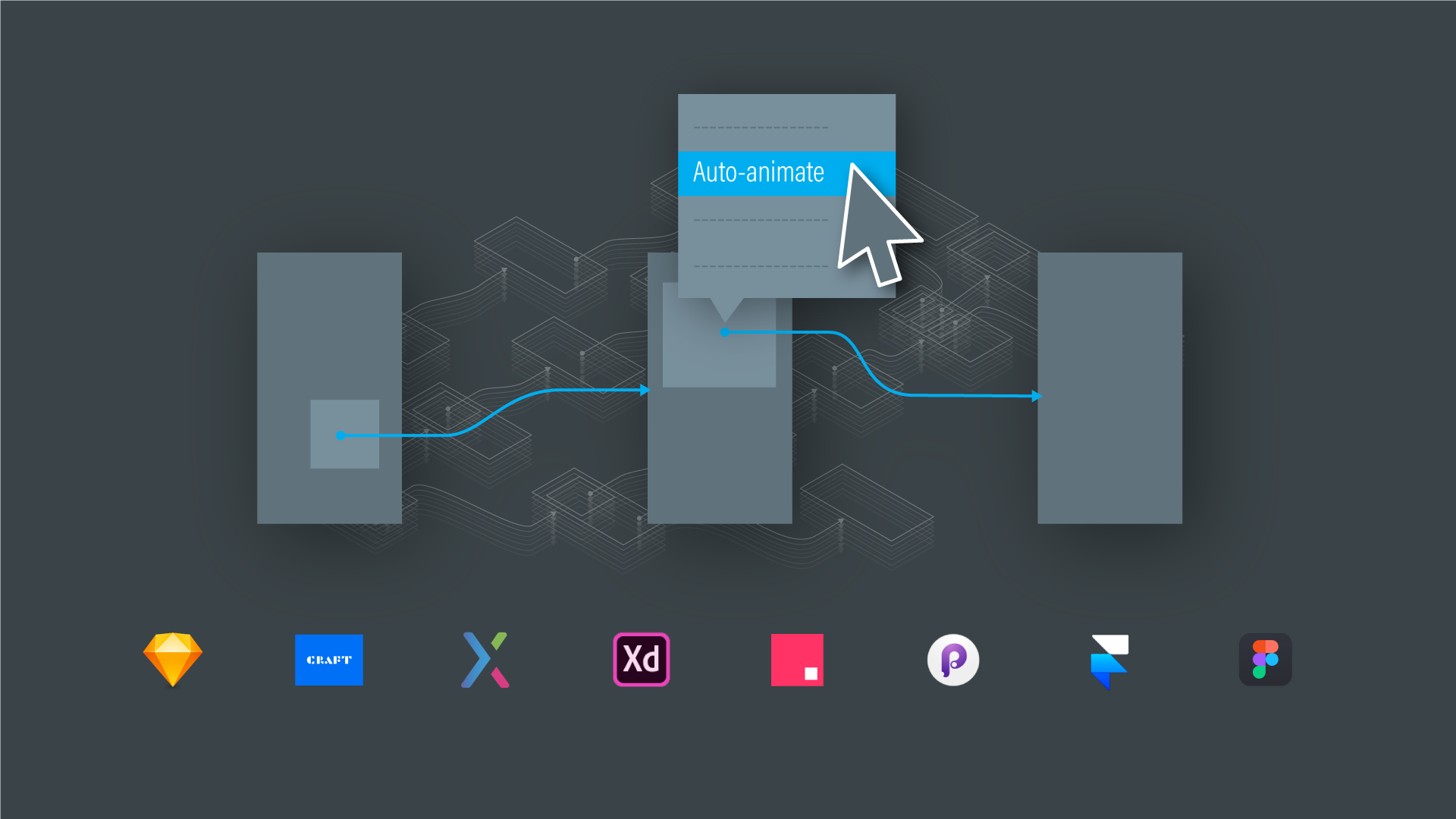 Although tools are not the most important things to learn as a UX designer, inevitably you need to use it in order to achieve your more important goals, to solve user’s problems. This article covers today’s 8 most popular UX prototyping tools including Sketch, Craft, Axure, Adobe XD, InVision Studio, Principle, Framer X, and Figma. First, it compares key aspects such as price, basic prototyping features, Sketch compatibility. Then it covers a high-level overview of each software program in terms of pros and cons and uniquenesses.

I understand there are many more tools out there, and other people may have different opinions. I also acknowledge that I am not familiar with every single tool available. I chose these 8 tools based on a combination of popularity and how these tools played key roles in the modern history of prototyping tools, and likely to take part in the future.

When Adobe Flash started going down, Axure took over in Web 2.0 Era, then Sketch came along to become a de facto standard. But lack of prototyping and cloud features in its early days opened up other new tools to emerge around Sketch, such as InVision, Principle, Craft plugin for Sketch, and Adobe XD with a new voice capability. Framer X is tackling a challenging developer handoff problem, which could be the future of prototyping. Figma is getting more tractions lately because it was built for cloud-based collaboration, which is becoming a norm in today’s accelerated remote work situation.

Comparison of 8 most popular prototyping tools

Because the whole point of prototyping is to quickly test concepts, ease of use and speed are critical. In most real world situations, time is very limited, so ability to quickly create a basic prototype just by connecting screens together is super convenient, and that’s all you need in most cases.

Principle creates all the transitions automatically, allowing some controls via timeline UI. This is great for creating a nice animation instantly. But it doesn’t offer the most basic “preset transitions” such as slide, push or dissolve like other tools. For this reason, Principle is positioned slightly to the right in the chart compared to others (except Axure).

InVision Studio also provides a timeline UI similar to Principle, but it also provides basic preset transitions, which makes it a bit easier when it comes to basic prototyping.

Above chart shows how 8 tools are positioned on a price vs. ease of use plane. As you can see all the tools except Axure fall under bottom-left quadrant.

This chart illustrates how much controls you have when creating a basic prototype, when it comes to sequence of multiple animations, timing and duration of animations, and ease in/out effects. Software programs are broken down into 3 groups.

The group in the top-left quadrant have a good balance of an overall ease of use and ability to fine-tune transitions and animations without too much work. These include InVision Studio, Principle and Adobe XD. All three do pretty good job in creating auto-animate transitions. Although similar, Principle seems to create the smoothest animations in most cases.

Figma recently added Smart-Animate feature, but currently it’s lagging compared to above three programs. Framer X can do fine-tuning but only via code. Sketch and Craft does not support fine-tuning. They only support basic preset transitions.

Axure can do many complex interactions, but only via Interaction Editor, which is not the simplest way from basic prototyping perspective.

Currently, InVision Studio is the most Sketch-compatible program, which supports opening Sketch file directly as well as copy & paste objects and symbols from Sketch.

When it comes to advanced prototyping capability, Axure covers pretty much any interactions possible to simulate how the actual product is going to feel like via Interaction Editor except voice interaction. But Axure does not support videos. (Axure supports GIF animations)

Framer X is another tool that has a potential to add a lot of advanced interactivity to a prototype. One of the unique advantages of Framer X is that it supports video and audio. You can even embed YouTube video and run it inside your prototype, which is pretty powerful. While Framer X has a store to download many useful components, many of advanced interactivity need to be added via code.

Principle has an interesting and unique feature called Drivers, which can add various micro-interactions quickly to make the prototype look real.

Adobe XD allows you to create voice interaction, which stands out from competition in this area as no other tools support that.

Sketch, Craft and Figma are fairly basic, so does not support advanced interactivity at this point.

Running a prototype on mobile

All the software programs have mobile apps to run a prototype except Framer X. Framer X is lagging in this area, where a prototype can only run inside a mobile web browser via QR Code.

Principle falls short in this area as it does not have a cloud. In order to share a prototype in Principle, you need to either send a Principle file and have it open from Principle mobile app, or export a prototype as a Mac Desktop app to be viewed on a Mac that doesn’t have Principle app installed. This means you cannot share a prototype with Windows users.

While Sketch remains strong in this area with its abundant plugins, Adobe XD and Figma are catching up. Framer X has a unique approach with its Store, which is super-easy to browse and download functional components such as YouTube Player. Moving forward, Adobe may have a powerhouse advantage in a near future, as seen in innovative new feature such as voice interaction. Many of popular Sketch plugins are already getting ported to Adobe XD too.

Sketch is the most popular tool, a de facto standard with various 3rd party plugins. But the default transitions are minimum, animate from right, bottom, left, top only.

Running a prototype locally, on mobile and in the cloud

InVision’s Craft plugin enables a slightly better prototyping capability directly within Sketch. These include gestures such as tap, swipe, and transitions such as dissolve, push, slide.

Prototype menu and toolbar are embedded in Sketch

Because Craft is a Sketch plugin, Craft menu appears as an embedded toolbar on the right side of the screen. Clicking on a circular head of a blue link arrow brings up prototype menu. Prototype options that Craft has are slightly more than Sketch’s options as below.

Running Craft prototype locally, in the cloud, on mobile

Once a prototype is uploaded to InVision Cloud, clicking on “+” icon allows you to invite a person to collaborate.

Axure has established its own unique place as a go to prototype tool to build a more robust, complex prototype with various interactions, not just screen-to-screen click throughs.

Many experienced UX designers still use Axure because you can do more, but the trend is more towards software programs with “connect screens with wires” interaction model, because that’s much faster to create simple prototypes.

While Adobe XD entered the market late, it has a unique voice interaction feature, which no other competitors support.

Its Auto-Animate feature is pretty strong and simple, however, there’s no timeline UI like Principle or InVision Studio to make adjustments.

It can directly bring in Photoshop files, Illustrator files. It can also open Sketch file directly.

InVision Studio can open Sketch file, or can take objects and symbols copy-&-pasted from Sketch, and can create a more sophisticated prototype via its timeline-based transition capability.

When opening Sketch files, there are a few things to keep in mind. Link layers in Edit timeline doesn’t support Sketch symbols currently. In order to achieve a smooth animation, a file may need to be optimized accordingly.

In order to publish more than one prototype to share online, you need subscription to InVision Cloud.

To use Team feature to collaborate with other designers, you need to purchase Team plan, which is $89/month for 5 team members.

Principle can import Sketch file directly, and can create a more sophisticated prototype.

Its animation is very smooth, with powerful auto-animate feature, which looks for same layer names between two screens.

However, there are a few things to keep in mind with auto-animate feature. It could automatically animate many unwanted elements in a screen depending on how layers are named between two screens. To avoid that, your may need to prepare a file in Sketch first by renaming all the layer names carefully.

Below shows a dynamic header that shrinks when a scroll starts, created with Drivers. As shown below, Drivers is a powerful and useful feature to build various micro-interactions.

Framer X is some of newer tools. You can copy & paste Sketch symbols and elements into Framer X artboard, but you cannot directly open Sketch file. Prototyping features for average users are fairly basic, and does not have auto-animate capability. But for code-savvy users, you can use code to do more advanced prototyping.

Running a prototype locally, on mobile

Figma is unique in a way that it was built primarily as a web application saving it’s files to the cloud by default, even in their desktop version. Figma can import Sketch file, but could take quite some time to complete the import. Prototyping feature is fairly basic.

So what is recommended for beginners?

There are three options depending on what’s important to you.

Given the de facto standard status of Sketch, Sketch with InVision Studio to animate prototypes makes a good choice. InVision Studio is free, but sharing a prototype requires cloud upload, which is limited to 1 prototype in a free account. And Sketch is not free.

Figma is free and gaining tractions these days because of its strengths in cloud-based collaboration feature. If realtime collaboration is a high priority for you, Figma is the way to go.

Thank you for reading. Best wishes to your success!

This article was published on Medium in UX Collective.