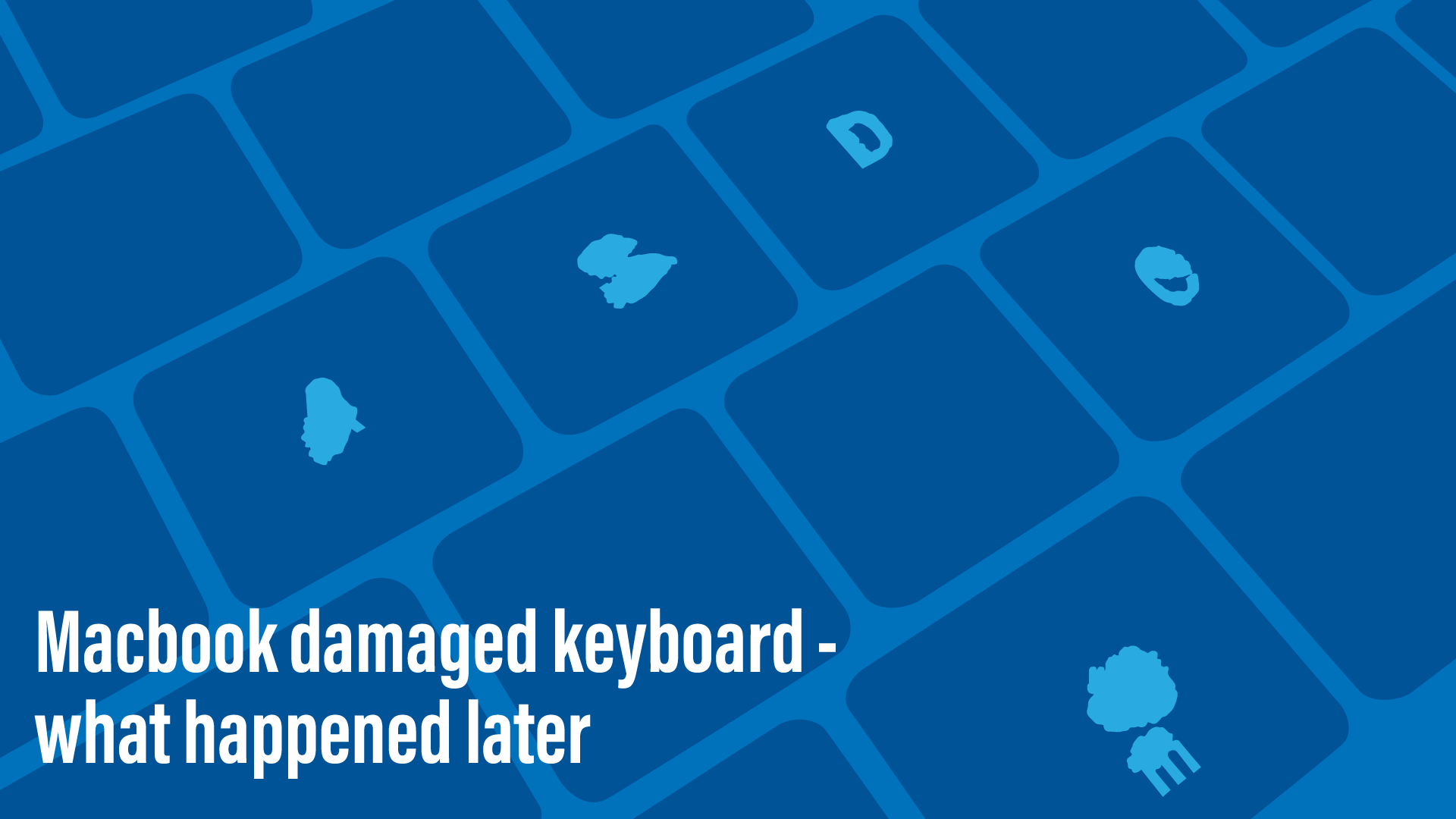 In one of my previous articles, I talked about my disappointment with my MacBook Pro damaged keyboard. I have a follow-up story on this.

Previously I was assuming that I would probably have to pay if I were to replace damaged keys because the initial 1 year warranty period has passed.

This was not only based only my assumption but actually one of Apple store person that I talked to before confirmed at  the time.

The other day, I had a chance to go to Apple store for a Genius Bar appointment for some other reasons. I casually asked about my MacBook keyboard problem.

To my surprise, the Apple store staff said that they can replace damaged keys up to 5 keys!

So I made another Genius Bar appointment few days later.

When I showed my MacBook Pro to a Genius Bar staff and mentioned that I was previously told by another staff that they could replace damaged keys up to 5 keys without charging.

he said “OK, let me replace all the damaged keys.” after examining my MacBook.

20 minutes later, he came back with my MacBook, with the keyboard looking good! He said, “OK, so I replaced all the 14 keys that were damaged.”

Wow, what a surprise!

And I asked, “So this is all free of charge?”

Me: so as I mentioned, this never happened to my older 17 inch MacBook. Why is this happening to this newer MacBook?

Here are what he mentioned:

So this newer MacBook has a lot thinner keys compared to older ones.

Each key is fully transparent when not painted so that the backlit LED shines through.

Then you put a white layer on it.

Finally on top of that, you put another layer with silkscreening of black with letter shape cutout so that the letter shows up in white.

Because of this 3 layer structure,  when the keyboard is heavily used, it wears off the top black layer, exposing the 2nd layer which is white.

His assumption is that because now that the entire key is thinner, each 3 layer might be also thinner, which might be the reason why this is happening more often compared to the older MacBook which had thicker keys, probably with thicker layers too.

He said that he has a 10 years of experience at Apple Store.

His explanation made sense, and I was very satisfied with how he replaced all the damaged keys of my MacBook.

I didn’t expect this to happen, so this was a pleasant surprise.

Which is why I wanted to make another video to give a clear statement and a shoutout to how Apple Store treated me with good care.

I know that my 15 inch MacBook is definitely a lot  thinner and slicker compared to my older 17 inch MacBook.

It’s definitely a lot lighter,  so its easy to carry around so that I can take it with me to anywhere. It’s great.

But if this slickness, thinness and portability is realized at the expense of “easier to wear off keyboards” that is constantly at the risk of getting messy, I wonder if that’s worth or not.

Maybe my typing or way of handling the keyboard applied more pressure than needed which might have caused the keyboard to wear off faster.

But I’m curious if Apple collected this kind of information from customers.

This type of issues require longer time period to fully observe and evaluate.

Maybe we already live in such a high-paced consumerism that companies and customers don’t care much about using one particular tech product for a long period of time because a newer product always comes out with faster performance, cheaper price, and better features so you just upgrade anyway?

It reminds me of things like mobile phone battery that dies immediately after the warranty expires, or a major car components start to break after  the 3 year warranty.

It also reminded me of Apple a few years ago that admitted that certain iPhone models had their batteries performance went down significantly after a certain period of time.

They ended up launching a special program to replace such iPhones’ batteries for free.

In a way, we are all trapped in this industry cycle, that we have to upgrade our devices to the latest ones in order to be on top of the technology trend, or in order to keep up with the highest productivity level to stay competitive as professionals?

One thousand dollar mobile phone must have sounded ridiculous in late 90s. But somehow it became a norm.

I still use iPhone 8 in the year 2020, and yes, it works perfectly fine! Because I’m a UX designer, so I feel like I always have to upgrade my phone to the latest.

But at the same time, I question this whole “have to upgrade” mentality and trend that we all have somehow blindly adopted without having a deeper thinking whether we really need it or not.